A fallen log. A dry creekbed. A mountain pass.

Something skitters, lunges, shuffles past.

A new creature lies around every corner.

Exquisite Biome is a game about the symbiosis of the natural world. Create an ecosystem, populate it with strange and wondrous animals, and see how they interact with one another.

In order to download this bestiary you must purchase it at or above the minimum price of $6 USD. You will get access to the following files:

Support this bestiary at or above a special price point to receive something exclusive.

community copies of Exquisite Biome are free on an honor system basis to those who cannot afford the game at its listed price.

if you have taken a community copy from the pool, consider — but do not feel obligated — taking a moment to leave a positive review, comment, or five-star rating to help boost the game's visibility.

So cool!!! I had a lot of fun playing and making up wacky creatures and their habits :D

There will be more community copies? Actually I cant afford

Reply
Aaronsxl13 days ago(+1)
Asercion, who’s probably best known in the indie scene for their phenomenal Microscope hack, i’m sorry did you say street magic, uses the tried-and-true method of deck-based prompts to allow players to design their own fantastical animals and direct their own nature documentaries. With gorgeous art by Si F. Sweetman, it’s a wonderful exercise in creature design and worldbuilding.
Reply
A gregarious vagrant bird (Manu)68 days ago(+1)

Tried this out with some friends and made some extremely funky beasties living in a cloud forest. Our scenes after creature discovery were staged like we were researchers out in these woods, finding these creatures for the first time. We narrated our potential process for having found these animals, describing their striking and odd features, and speculating upon the function of said structures and the scenes we observed that would eventually help us fully understand their ecology.

We firstly ended up with the Humphrish, a pollinating fish with long, nectar-licking mouthparts which resembled the brightly-colored inflorescences on a bromeliad, which was where the females of the species would live. Sequential hermaphroditism would occur when males (responsible for guarding the eggs dropped from the treetops by the female, and normally found in the leaf litter at the foot of trees hosting these bromeliads) would climb the tree and attempt to oust the female.

Predating upon these fish was a small, mantis-like insect that would bioluminesce in a way that resembled the female humphrish's mouthparts, and trick males into climbing up the trees to it. Per our scenes, it initially escaped our notice because it wouldn't activate its bioluminescence when we were out in the woods at night with torches!

Finally, the apex predator of this ecosystem was the "sharpcat". We had to take some liberties with card interpretation for this one, as we ended up with the King of Spades (sedentary, very large groups) for its third card. We decided that this microraptor (with clawed wings, winged legs, and a stiff tail ending in an additional hook which acted as a rudimentary fifth limb) was the wild, ancestral species that was domesticated into this world's people's equivalent of our domestic house cats. While technically an active hunter and solitary in the wild, their domesticated descendants are generally more placid and live in high densities within households in urban areas.

An all-round excellent game and one I'm keen to return to, both with friends and as a solo adventure.

While this can be roleplayed, you can use this exclusively as a creative exercise in a debate style and it also works wonderfully.

One of the most interesting and innovative designs I've seen in a while and my new go to way of populating a new biome in an RPG campaign with the help of the players, absolutely recomended!

Leaving my review public in the comments, because I truly love this game and hope this encourages someone who was on the fence about buying it to do it, because it's so worth it.

I play worldbuilding games with one of my friends on semi regular basis and, after our session of Exquisite Biome ended (which it did but a couple minutes before I started writing this comment), we both agreed this is one of the best sessions we've had so far. The prompts are the highlight here, every time they inspired something we would have never thought of ourselves and drastically changed not only our entire idea of the creature but the entire ecosystem (ex. a transparent flyer squid-like creature turned out to have captivating eyes, which we then decided bear a resemblence to fruits that are common in the area, which completely transformed them into ambush predators and came up in nearly every scene afterwards). They also almost always lead us to follow up questions, which even further developed the world in interesting ways. The freeform structure of the game never stopped us from these tangential discussions about proprioception, blood color and whatnot, which I really appreciate. It never felt like anything here ever tied us down, we were free to go as wild as we wanted and provided all the tools to do so, which I think is the best approach in this kind of games. The whole thing is also decorated with this stellar artwork (with a really interesting and pretty color palette), which, aside from just being very nice to look at, also serves to inspire many ideas.

Overall, one of my favorite worldbuilding games so far. I will certainly come back to it, not only with my friend to continue further building this ecosystem, but also with other people.

Incredible game, playable as a solo or as a group. The biologist in me can't wait to play it, everything seems grounded and realistic, while still giving you an incredible diversity.

Buy it, you won't regret this.

Also, I'm looking for games to translate in french, and I'd love to make this one available for my french solo RPG community. Could we discuss this maybe?

I just played this for the first time solo this afternoon (i did a little live play thread on twitter as i went). Beautiful and concise game, that I think would be even more fun to play with friends, or experiment with structure. I had a lot of fun and felt very inspired as a science fiction writer who really enjoys xenobiology in world building but rarely gets a chance to play around with it. the layout and illustations are also extremely beautiful (well done SiFSweetman!) and i'm glad this was being posted about on cohost so i remembered to check it out! looking forward to either using this for story prompts, or as a worldbuilding game with friends

update: here is a better consolidated and organized collection of my 3 creatures from my solo game. this also includes further expanded upon descriptions of their appearances!

I left my full review in the link above, but in the TLDR: this game is incredible and super cool and everyone should buy it and play it and tell me about the cool beasties they make!

Thank you kindly for your review — I'm a big fan of the Shepherd Spiders! 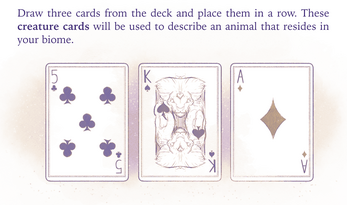 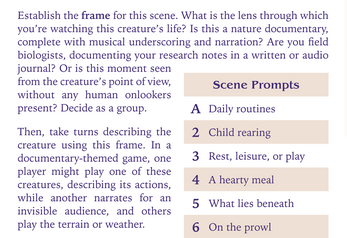 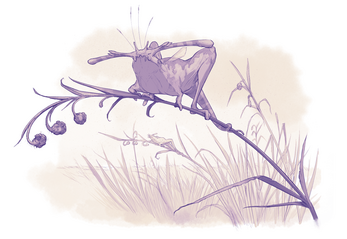